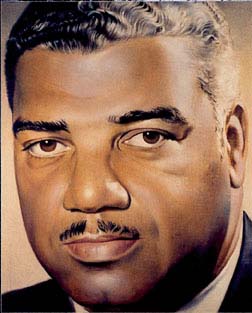 Whitney Moore Young, Jr., executive, was born in 1921 in Kentucky, where he graduated from Kentucky State College. He took his Master’s degree in 1947 at the University of Minnesota. Degree in hand, he joined the staff of the Urban League of Saint Paul, Minnesota, as the director of industrial relations and vocational guidance programs. Three years later he became executive director of the Urban League in Omaha, where he was also on the faculty of the School of Social Work at the University of Nebraska.

During the fifties he also taught at Creighton University and at Atlanta University. In 1960 he held a Rockefeller Foundation grant that gave him a postgraduate year at Harvard University, and this leave was followed by appointment in 1961 as the executive director of the National Urban League. He was a strong force for good in that important position, and in 1963 he was one of the organizers of the March on Washington. A book of his essays entitled ‘To Be Equal’ was published in 1964 and throughout the 1960s he continued his work. In 1971 that work took him to Lagos, Nigeria, to a conference sponsored by the African-American Association, where he died at fifty years of age. Under his leadership the National Urban League had grown to about a hundred affiliate organizations in over thirty states.