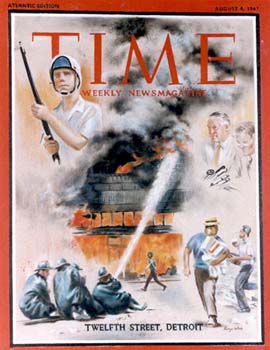 The riots in Detroit in the late sixties were an epiphany for Robert Templeton. They came out of a long tradition of blacks in that city. Early in the nineteenth century, it was the last stop on the Underground Railroad for fugitive slaves heading for freedom in the part of Canada that abutted Detroit, and later the goal for waves of blacks migrating from the South for well-paying jobs in the auto industry. There they mixed with immigrants from Europe on the assembly lines and in the city, and violence broke out often, as they found themselves
competing for jobs.During World War II, the riot begun at Belle Isle was a terrible racial confrontation. The riot of 1967 had Twelfth Street as its epicenter with looting, setting of fires, and pitched battles with guns and knives, making the area a no- man’s-land. It was here that Templeton sketched for Time, before the National Guard, numbering about ten thousand troops, was sent in by Governor Romney, and President Johnson had sent a contingent of paratroopers.Forty-three people were killed, seven thousand were arrested, and property damage at twenty-two million dollars did not include much that was lost by those in the area that had become a charred and waterlogged and rubble-strewn disaster area. These studies by Templeton show the tense situation on Twelfth Street, firemen battling out of control flames, looters, Guardsmen, and the Governor’s press conference.