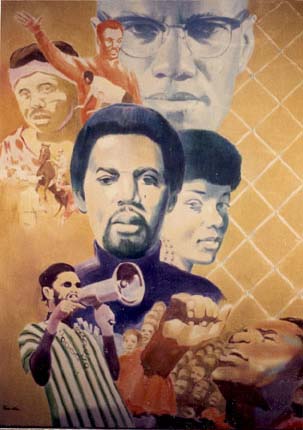 This collective portrait of a generation that came of age in the sixties evokes the vital and conflicting spirit of those interesting years. They were portrayed here as primarily urban blacks encompassing such contradictory slogans as “Burn, Baby, Burn” and “Supercool.” They expressed the optimistic idealism of youth with its attendant impatience. Although they shared youth and enthusiasm with the white hippie flower children, they saw the need to do their “own thing.” The newness of that was offset by their search for their traditions through interest in the antiquity of their African origins and their history in American slavery. Their sense of oneness led them to address one another as Soul Brother or Soul Sister. The term Negro with them gave way to be replaced by the term black and the Afro haircut became a symbol of self identity and Black Pride.

The artist evokes this exciting period with a choice of images that include anchor fencing, mounted police, the stare of Malcolm X, the various approaches to reaching audiences with their messages, and the youthful forthrightness of the young man and woman. It was a formative time for many leaders.