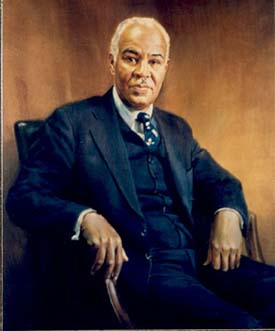 Roy Wilkins, leader of the NAACP, was born in Missouri in 1901. He was brought up in Minnesota, where he worked his way through the University, with a number of jobs from stockyard worker to editor. Upon his graduation, he began to work on the Kansas City Call, a major black newspaper. He became active in the NAACP there and was secretary of the local city chapter. Recognized for his leadership qualities, he became the assistant executive secretary of the national NAACP under Walter White, and soon succeeded W. E. B. Du Bois as editor of Crisis, the major organization publication. He was a consultant to the War Department during the Second World War and served with Du Bois and White as advisers at the 1945 San Francisco conference that founded the United Nations. He continued to lecture and write, and upon the death of White in 1955, he was appointed executive secretary of the organization he had seen grow to 1300 branches and chapters and a quarter-million members.

During his own stewardship, the NAACP reaffirmed its profound commitment to the democratic process and integration, condemning separatism and violence. He served in the administration of Lyndon Johnson as an adviser, and he was awarded the Medal of Freedom, the nation’s highest civil honor. The Civil Rights Acts of 1957, 1960, 1964, and 1965 were strongly supported by Wilkins and his NAACP.He retired in 1977, covered with honors, and was succeeded by Benjamin Hooks.