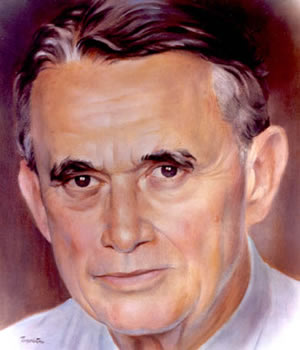 Ralph Emerson McGill, newspaperman, was born in Tennessee in 1898 and studied at Vanderbilt University between 1917 and 1922, with time out for service in the Marines during 1918 and 1919.Upon graduation, he joined the staff of the Banner in Nashville where he worked for a half-dozen years before he moved to Atlanta and its Constitution. He spent the next decade as its sports editor, before becoming executive editor for another four years. He was the editor from 1942 to 1960. In those years, he had become an outspoken critic of bigotry and segregation.

For the decade of the 1960s, he was the publisher of the Constitution, and his writings led to his being called the ‘Conscience of the South.’ In these years many honors came to him, including the Pulitzer Prize for editorial writing, the Presidential Medal of Freedom in 1964, and honorary degrees from about twenty colleges including Harvard, 1961; Morehouse, 1962; Notre Dame, 1963; Brown, 1964; and Atlanta and Tufts, 1965. He was a trustee of the Carnegie Endowment for International Peace. His adopted city of Atlanta honored him by changing the name of a street to Ralph McGill Boulevard, after it had carried for decades the name of the first imperial Wizard of the Ku Klux Klan. His books include ‘The South and the Southerner’, and ‘No Place to Hide: The South and Human Rights’. His writing had chronicled the South’s ‘Second Reconstruction’.