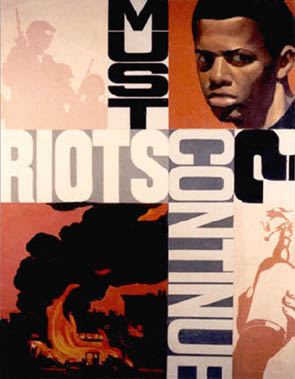 Must Riots Continue? became a question for national attention, and President Johnson appointed a Commission on Civil Disorders with Governor Kerner of Illinois as its chairman. The report came out ahead of schedule and found that mass hysteria and great exaggeration had taken the reports out of all true proportion and created an atmosphere of mindless fear.

There were riots and disorders and they were analyzed. Most of the rioters were young men between fifteen and twenty-five, school dropouts, who had never lived anywhere but in the ghettos and were full of hostility toward the middle class, black and white. They distrusted the political system and the police who were its enforcers. These neighborhoods had crime-rates as high as thirty-five times that of some white neighborhoods, a chronic shortage of adequate health facilities with a corresponding infant mortality rate, poor trash collection that led to an alarming rate of rat-bites, and the simple compression of larger and larger numbers of blacks into already crowded ghettos. The list went on.

President Johnson accepted the Kerner Report in March 1968. The next month, the assassination of Martin Luther King, Jr. led to another sweep of riots through more than a hundred American cities, and seventy thousand federal troops, black and white, were able to halt the rioting, for a time. The 1992 Los Angeles riots and more recent unrest in NY City and Ferguson, Missouri prove that the potential remains and will remain until the needs outlined in the Kerner Report are addressed. In the meantime we have Templeton’s question still before us.