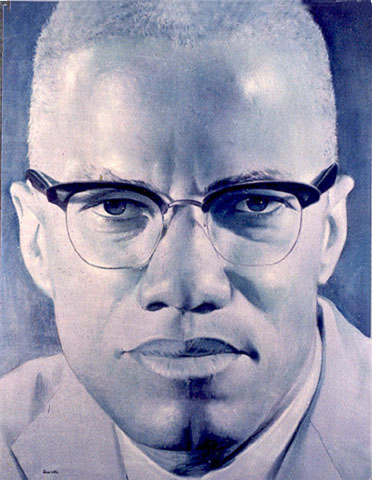 Malcolm X, clergyman, was born Malcolm Little in Nebraska in 1925, the son of James Earl Little, a Baptist preacher who advocated the black nationalist ideals of Marcus Garvey. Threats from the Ku Klux Klan forced the family to move to Lansing, Michigan, where his father continued to preach his controversial sermons despite continuing threats. In 1931, Malcolm’s father died in what was reported to be a streetcar accident, but which many felt was a brutal murder by the white supremacist group Black Legion. Michigan authorities refused to prosecute his death as a crime, saying that it was an accident. In 1937, Malcolm’s family was broken up by welfare caseworkers, claiming that his mother, who held the same beliefs as her late husband, was mentally unfit to raise them. Despite living in a series of foster homes and institutions, Malcolm did well in school, but after experiencing systemic racism in the eighth grade, gave up on school and moved to Boston, where a half-sister lived.

In Boston, he became increasingly lost in a life of drugs and crime and was sentenced to ten years in prison by the time he became twenty-one. While inside, he learned about the Black Islam movement, and corresponded with Elijah Muhammad, its leader.

By 1952, he was out on parole and speaking out about his belief that the white Christian world was intrinsically evil and dangerous, and that the only way for blacks to survive was to separate themselves from it. He adopted the name by which he is remembered, Malcolm X, and founded mosques in Philadelphia and Harlem. His increasingly radical statements led to his expulsion from the Black Muslim movement and to the formation of his own nationalist groups, the Muslim Mosque and the Organization of Afro-American Unity.

He was seen by friends and foes alike as an angry young man who took pride in his controversial social views including racial separation. He considered the nonviolence advocates to be utterly wrong, and he became famous for saying so. In this way, he helped the nonviolent movement by making it appear to be a more palatable alternative for moderate blacks and whites.

By 1965, Malcolm X had become slightly more moderate in his own views, after a 1964 pilgrimage to Mecca, when he was killed in New York City by members of a rival black group. His ‘Autobiography’ was published shortly after his death, and in 1992, a movie on his life was a popular success.