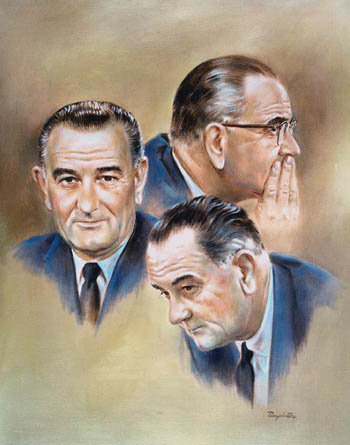 Lyndon Baines Johnson, the 37th president of the United State, was as dedicated and aggressive a politician that ever rose to prominence in America. His early years growing up on a farm in Stonewall, Texas, were spent in poverty. From that experience, sprang a lifelong empathy for the poor and the disadvantaged. His political career officially began in 1937 as Texas state representative. In 1949, he was elected United States senator and served until 1961, holding the posts of Senate Majority Whip and Senate Majority Leader. Johnson was selected to be Kennedy’s running mate in the 1960 Presidential election.

After Kennedy’s tragic assassination in 1963, LBJ became president and embarked on designing and implementing what he called the “Great Society.” During his Presidency, he pushed for and signed legislation that created Medicare, the War on Poverty, Medicaid, an increase of public funding for education, public television, the Civil Rights Act of 1964, and the National Voting Rights Act of 1965 among many other accomplishments. The Civil Rights Act of 1964 outlawed most forms of racial segregation, and was signed on July 2, 1964. The National Voting Rights Act outlawed voting discrimination, and was instrumental in allowing millions of blacks to vote for the first time.

Johnson also showed his strong support of civil rights with his 1967 nomination of civil rights attorney Thurgood Marshall to be the first African American Associate Justice of the Supreme Court.

Many of the bills he signed, in particular the Civil Rights legislation, continue to have a positive effect on America to this day.

“There are no problems we cannot solve together and very few that we can solve by ourselves.”