From Despair To Rage 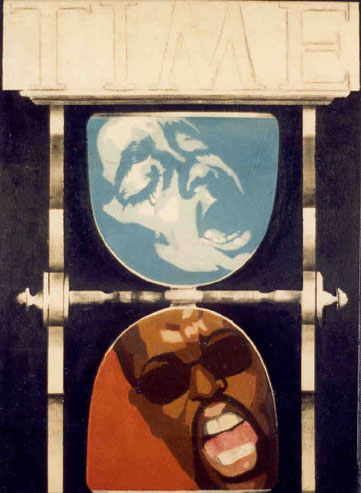 From Despair to Rage is another Templeton image to emerge from that tense period of the late 1960s, a period that saw a decline in militancy from the middle of that decade to the middle of the 1970s. The riots of 1968 ended the belief of most that violence could achieve anything of importance, and the summers of 1969 and many that followed were “cool.”

Some militant groups, among them the Black Panthers, were able for a brief moment to attract the attention of the media, but their particular messages of despair and anger were ignored generally in the black communities. They faded away. A series of Black Power Conferences pressed for going beyond the traditional goals of civil rights, and instead, gaining black control of all black affairs. But while these conferences went forward, gains were achieved beyond them. Ironically, one conference was held in a city that had a black mayor elected by blacks and whites; more followed soon in other cities. By 1972 there were enough black congressmen to make the Black Caucus an important force. Other black leaders found that the poor, both black and white, had common needs that could be addressed by such an approach as that of George Wiley and his National Welfare Rights Association. And so it continued through the seventies, and into the Reagan years and beyond. The question of despair and rage remains, still not answered but still addressed.