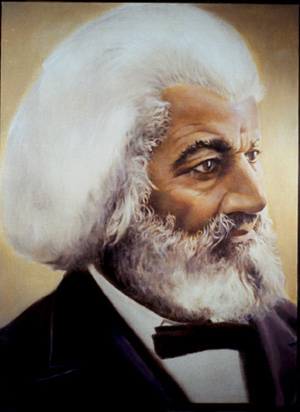 Frederick Douglass, abolitionist and government official, was born of a white father and a black slave mother in Maryland, in 1817. Despairing of his future under slavery, he escaped and found his freedom in a coastal town in Massachusetts, where he learned to read and write and to speak tellingly and with prophetic strength about his ordeals as a slave and as a runaway. The abolitionists were impressed with him, and he was heard on hundreds of platforms in the US, and in Canada and England, calling for rights for all. He opposed the colonization movement, which would have freed slaves only for the purpose of settlement in such African outposts as Liberia. He was a loud and clear advocate of the uncompromising struggle for immediate mancipation in his speeches and in the pages of his newspapers as well. He became famous, and he numbered Abraham Lincoln, Harriet Tubman and Sojourner Truth among his friends and admirers.

In later years he served the US as diplomatic minister to Haiti and as a government official in a succession of administrations. He was Marshal in the District of Columbia for annual celebrations of freedom. He traveled and lectured widely in the US and abroad, and became an international figure whose judgments in speech or print were widely respected. In his life story, ‘My Bondage and My Freedom’, he wrote that “I have worked hardest to get equal rights for Negroes” but this focus “does not keep me from working to help people of all races.”