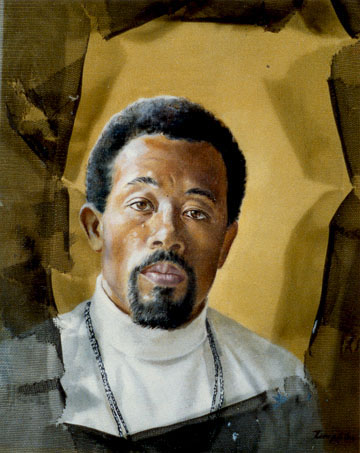 Leroy Eldridge Cleaver, one of the original members of the Black Panther Party, was born in 1935 in Wabbaseka, Arkansas, and grew up in California. He spent time in prison as a youth, and in 1958, at the age of 23, was sent to prison after being convicted of assault with intent to kill. He was paroled in 1966 after serving 8 years of a 14 year sentence. While in prison, he penned ‘Soul on Ice’, a series of essays outlining his views on racism in America. After he was paroled, Cleaver joined the newly-formed Black Panther Party, along with Bobby Seale and Huey Newton. Cleaver became the group’s Information Minister, serving as spokesman.

In 1968, Cleaver was involved in a shooting with police in Oakland. Fearing conviction, he fled the county and spent seven years in Algeria, Cuba and France. He returned to the US in 1975, renounced the Black Panther Party and was placed on probation for the earlier shooting. Cleaver underwent a political transformation, becoming a born-again Christian, and embraced anti-communism. As he reinvented himself, he ran for the 1986 Republican Senate seat in California. He fell into poor health, and died in Southern California in 1998. He was survived by his son Maceo Eldridge Cleaver, daughter Jojuyounghi Cleaver, and their children.

Templeton’s unique portrait is framed by a torn screen, representing the barriers which were torn down by the Black Panther Party.