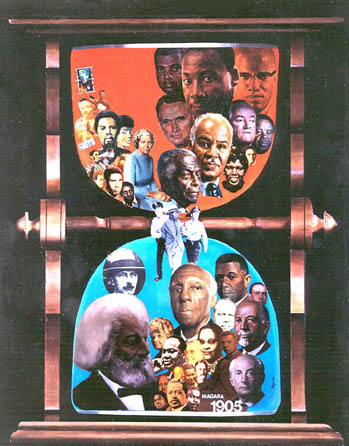 The unifying theme of this multiple image is the hourglass that contains the many faces of the movement. Those of the formative years in the bottom half of the hourglass include Douglass, Washington, Ovington, and Du Bois among the individual portraits created by Templeton for this exhibition and it also includes others, black and white, who were active in the earlier days of the civil rights movement. At the neck of the hourglass is the image of the young minister, Martin Luther King, Jr., being taken away by white policemen from one of his many nonviolent protests, likely to spend some time in jail as a consequence. In the upper chamber of the hourglass are the figures of the latter half of the twentieth century, drawn from Templeton’s individual portraits of Mays and Wilkins and Abernathy and McGill and Malcolm X and Whitney Young and Rosa Parks. The young blacks of the sixties are there also, the new generation ready to accept the challenges that their predecessors had faced and fought.

This image of the hourglass with its unstoppable flow of individual grains of sand, or people, as is the case here, stands as a symbol for the cumulative effect that many individuals working together have to bring about change that cannot be ignored. Robert Templeton and Dr. Mays shared the concern that the people who carried the burden of the struggle for black civil rights should not be forgotten, and named the collection ‘Lest We Forget – Images of the Black Civil Rights Movement’.