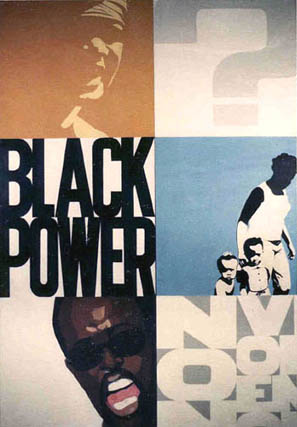 The civil rights struggles of all people throughout all time have required that the choice among contradictory philosophies and tactics be made. For blacks in America, the polarization of conflicting views began in the period before the Civil War, between those who favored gradual manumission of slaves for colonization to Africa, and those who demanded complete and immediate abolition by whatever means, violent if need be. Early in this century the accommodating views of a Booker T. Washington ran afoul of the clearly impatient demands of a W.E.B. Du Bois, and this creative tension continued through the twentieth century, and will continue.

Here, Templeton portrays this dilemma in an evocative study from the late sixties, in which the extreme factions in the struggle for civil rights are embodied in the placement and choice of images, in the dramatic use of color, and in strong graphics and type. On the left the black power impulse of such an activist as H. Rap Brown called for an uncompromising, impatient, and aggressive demand for justice. Against this stands the non-violent commitment of such a leader as Martin Luther King, Jr., favoring a belief in passive protest and continuing dialogue, while also continuing to rely on the justice of the courts.