Robert Templeton was born in Iowa in 1929, at the onset of the Great Depression. The son of a poor Iowa farmer, his youthful fascination with Norman Rockwell’s Saturday Evening Post covers instilled in Templeton an early love of art and the unconventional desire to pursue art as a career. As a teen, he enrolled at the Kansas City Art Institute, where he was influenced by such artists as Thomas Hart Benton. On a summer trip to Santa Fe, NM, Robert befriended John Sloan, the New York urban artist. They continued their friendship when Templeton went to New York City to study at the Art Students League. Sloan acted as a mentor, and he and his wife Helen often invited Templeton over for Sunday tea, to enjoy conversations about art and life.

At the Art Students League, from 1950 to 1952, Templeton studied under Louis Bosa and Reginald Marsh, among others. He was drafted into the army in 1952, during the height of the Korean War, and underwent basic training at Fort Leonard Wood, Missouri. He was then sent to Europe and was stationed in Germany. During his army years, he further developed his artistic skills by painting murals at Army bases, in addition to his duties as a Signal Corps photographer. His photographs and sketches appeared in The Stars & Stripes, the US Army newspaper. It was in Germany that Templeton met and married his wife, Leonore.

They returned to New York City, where Templeton began to do portrait commissions. In 1963 he moved with Leonore and his young son Mark back to his native Iowa, where he painted for two years in the small rural town of Corning. The paintings became the basis of the “Machine Man” series, which debuted to critical acclaim as a one-man show at the Banfer Gallery in New York City in 1964. The work reflected his fascination with the ribbons of interstate highways cutting through the Midwestern landscape, man’s relationship to the automobile, and his love of trucks. In 1965, the Templeton family, which now included young sons Kevin and Tim, moved to rural Connecticut, where Templeton had purchased a home and land where he built his art studio. 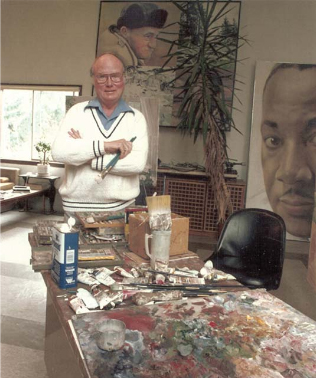 Two years later, in the hot summer of July 1967, he was in Detroit on a portrait commission, when the riots broke out, and he made sketches which were featured on the cover of the August 4 issue of Time Magazine. This experience inspired him to create a visual record of the black civil rights movement. He worked with Benjamin Mays to make a list of the people whose portraits would personify the record of the struggle for equal rights. Through the next two decades, such leaders of the movement as Ralph Abernathy, Asa Philip Randolph, Rosa Parks, Benjamin Mays, Ralph McGill, Hubert Humphrey and Roy Wilkins had their portraits painted by him for this collection. Martin Luther King, Jr., was assassinated before a sitting could be scheduled, so for Dr. King’s portrait, Coretta Scott King helped Templeton choose the photo which became the basis of Templeton’s largest and most impressive portrait.

Templeton’s work for Time Magazine continued. He was also commissioned by CBS News to provide courtroom sketches during the Bobby Seale Black Panther trial and the Pentagon Papers trial. His other portraits were of such national figures as President Jimmy Carter, displayed at the National Portrait Gallery, and national, regional and local leaders in industry, politics and finance. But his consistent efforts during almost twenty years were toward the collection that he and Benjamin Mays named “Lest We Forget.”

“Lest We Forget” was first shown in 1986 at Emory University in Atlanta, with funding from the NEA and the Georgia Council for the Arts. It was subsequently sent on a national tour under the auspices of the United Negro College Fund, with a grant from Heublein. The tour culminated in an exhibition on Capitol Hill.

The last years of his life Robert Templeton devoted to his landscape paintings. He was fond of saying “The world is sitting for its portrait, and I’m the one to paint it” as he was traveling, armed with sketchbook and camera, to Puerto Rico, Germany, Greece, Egypt, France, and Italy, and he would put all his memories down on canvas upon his return to his studio in Connecticut.