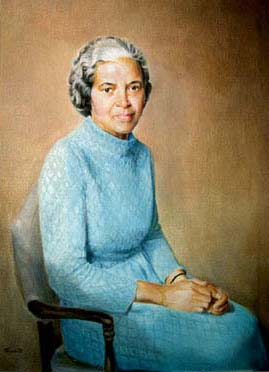 Rosa Parks, seamstress and symbol, was born in Tuskegee in 1913 as Rosa McCauley, and attended Alabama State College. She married Raymond Parks in 1932, and was active in the Montgomery chapter of the NAACP, serving as secretary and youth adviser from 1943 to 1956.She came to the notice of the world when in 1955 she refused to yield her seat in the white section on a Montgomery bus. She was promptly arrested, and this led to a boycott of the city bus system organized by two local ministers, Martin Luther King, Jr., and Ralph Abernathy. Their newly organized Montgomery Improvement Association oversaw the year-long boycott that ended segregation in the bus system.

Throughout her life, she gained many honors including the Springarn Medal of the NAACP in 1979, the Martin Luther King, Jr., Award, the Service Award of Ebony, and the Martin Luther King, Jr. Nonviolent Peace Prize. She earned ten honorary degrees including one awarded by Shaw College in Detroit, where she worked as secretary and receptionist in the office of Congressman John J. Conyers, Jr.

Part of the citation for her Mount Holyoke degree read, “When you led, you had no way of knowing if anyone would follow.” In 1984, she received the Eleanor Roosevelt Woman of Courage Award. In 1990 her seventy-seventh birthday was held at the Kennedy Center with three thousand black leaders, government officials, and others celebrating her life.

Her autobiographies included ‘Rosa Parks: My Story’ and ‘Quiet Strength’. Rosa Parks died in October 2005. Her birthday, February 4th, has become commemorated as Rosa Parks Day in California and Ohio.