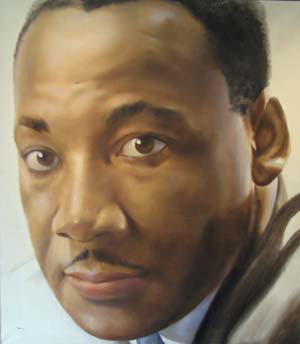 Martin Luther King, Jr., clergyman, was born in 1929 in Atlanta where he was brought up, and he entered Morehouse College at the age of fifteen. There he fell under the good influence of Benjamin Mays. He was ordained in his father’s Ebenezer Baptist Church in 1947, and received his bachelor’s degree in sociology the next year. He then went to Crozer Theological Seminary in Pennsylvania, where he was student body president and valedictorian of his graduating class. He went on to Boston University for his doctorate, received in 1955. It was there that he studied in depth the nonviolent resistance beliefs of Gandhi and others and settled upon a philosophy to guide his life.

He took a pulpit in Montgomery, where he came to early fame as an organizer of the Montgomery bus boycott. He became the national spokesman for the nonviolent wing of the civil rights movement and an organizer of the Southern Christian Leadership Conference. In 1959, he joined his father as co-pastor in Atlanta.

He traveled and lectured widely and spent some time in the Birmingham jail following a series of nonviolent demonstrations. He was one of the leaders of the 1963 March on Washington, where at the Lincoln Memorial he delivered his memorable “I Have a Dream” speech. He received the Nobel Peace Prize in 1964. He led the Memphis to Jackson March that followed the murder of James Meredith. In March 1968, he proposed the Poor People’s March on Washington, but the next month he was shot by an assassin and died in the hospital. The manner of his death led to the outbreak of riots in over a hundred cities in America.

He is remembered through his writings and the many studies about him. Those studies agree that it was the adoption of the passive resistance and nonviolent protest approach of Gandhi that gave leadership to King throughout his civil rights career, adding conviction to his eloquence.