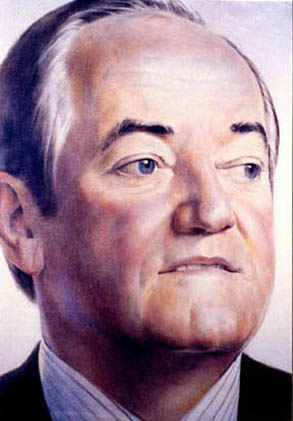 As a US Senator from Minnesota, Hubert H. Humphrey was an active liberal with a creative program to advance equal rights, one of the first in the Capitol to recognize the need for a strong bill of civil rights for blacks. Beyond Congress, he helped to write a strong civil rights plank into the platform of the Democratic party. He supported the Peace Corps, urban renewal, aid to health and education, and many other causes as senator, and from 1965 to 1969, as the vice president of the United States during the Great Society administration of Lyndon Johnson. His attempt to succeed Johnson in the election campaign of 1968 failed, and he turned for a time to teaching at Macalester College, and at the University of Minnesota.

In 1970, he was returned to the Senate, where he continued his liberal campaigns. He earned the name of the Happy Warrior, and he was happiest when he was charging toward another liberal goal. The great federal programs in the area of civil rights from 1949 to the late 1970s owe more to him than to anyone else. Among his books are ‘The Cause is Mankind: A Liberal Program for Modern America’ (1964), and his autobiography, ‘The Education of a Public Man’, of 1976..